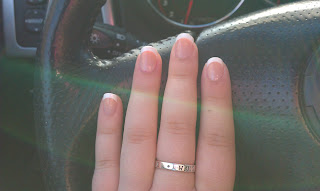 Okay, so I don't really know how this is going to work, but I'm gonna give it a try! I decided that I'm going to make a nail polish blog because I love doing things with my nails and I have way too many nail polishes to just keep them all to myself! I do prefer OPI and some Essie, but I'm getting in to other brands too.
Today I decided I would put on some Kiss fake nails (travesty, I know), but I wanted to try them to see what they'd look like. I generally don't like long nails because I tend to think that most polishes look better with a little shorter nails, but of course, that's just my opinion.
And yes, I was driving when I took these pictures, but I was stopped at a light so it's not that awful. 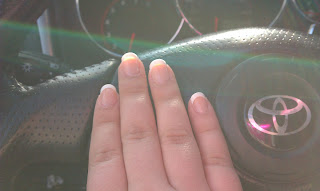 I think the nails look good, but I kind of don't like the thumbs. Also, I'm already getting bored with the French manicure on the nails, so I think tomorrow I may put some polish on them.
I'm not sure how to get people to read this thing, so I'm pretty sure at this moment, I'm just talking to myself, but that's okay! It's a little rambly anyway.
Posted by Alexa at 8:46 PM No comments:

Alexa
Hi! I made this blog mainly to showcase all the different nail polishes I have and to share my opinions about the good and the bad, but also if I find other things I want to do with my nails, I'll put that on here too! It's to show off my addiction and kind of to give it a little validation so I don't feel like I'm doing this only for myself lololll. I'm a 20 year-old English student who wants more than anything to make this blog a success, and to one day live in Canada!